Indentured Labourers in Mauritius: another form of Slavery?

Today, 2 November 2010, The Republic of Mauritius is commemorating the 176 anniversary of the Arrival of Indentured Labourers in Mauritius. In this context, a series of Activities are being organised by The Aapravasi Ghat Trust Fund and the Ministry of Arts and Culture, just like last year. However, one particular event is the staging of a full length play in Hindi on Manilal Doctor in Mauritius; visit: www.manilaldoctor.info for more info and updates.

This blog post of one focuses on the System of Indentured labourers in Mauritius (l’engagisme). I think since in primary school days that I got to hear that our Ancestors came by boat from Calcutta India to Mauritius, in order to find Gold abundantly available in an island. During my college days, got the opportunity to work with the MGI folk museum for their website: www.mgifolkmuseum.mu.

But the question I ask myself is: Did the practice of Slavery left no trace in the way the new labour system, Indian Indentureship was practiced in Mauritius between 1835 and 1912???

I think Historians would be able to shed more clarification on it, but a bit of my literature review reveals the following: 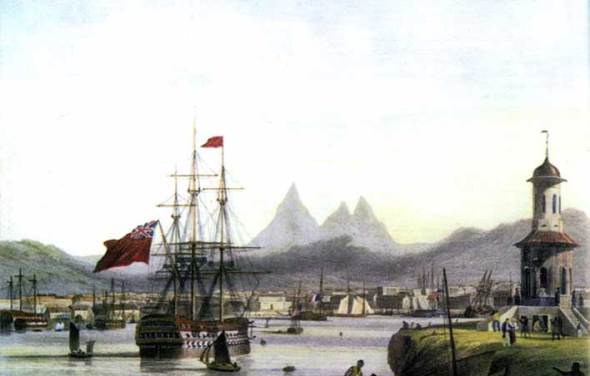 The introduction of Indian contractual workers by individual planters during the British period started between 1820 and early 1830s. Arrival registers of the Indian Immigration Archives (MGI) testify that labourers from the Indian Peninsula disembarked in Mauritius as from 1842 and originated from Colombo, Cochin, Pondicherry, Madras and Calcutta. These experimental importations of local planters were an evident means of overcoming the acute shortage of labour arising in the colony.

The Importance of Slave Labour

The slave trade which flourished in the 18th century, was attacked by reformers in Britain and in 1787, a society for its abolition was instituted in England. In the face of mounting opposition against slavery and the conditions of slaves on plantations, William Pitt, the British Prime Minister, tabled a motion in Parliament in 1792 to gradually abolish slavery. In 1807, the shipping of slaves to British colonies was forbidden and in 1808, the slave trade was prohibited. When in 1810, the British took over the island, slave trade became illegal. In 1834, British abolished slavery. It is phased out on the island under a transition period known as “apprenticeship”.

However, in Mauritius and elsewhere, the sugar plantation economy since its inception had depended, for its success and profitability, on plentiful, cheap, coercible and disciplined labour force. Slave labour had, for centuries, been the backbone of the plantation colonies of the Caribbean.

In 1835, Indentured labour system introduced. In subsequent decades hundreds of thousands of workers arrive from India. Mauritius was the first British Colony to embark on the ‘Great Experiment’ of importing an indentured labour workforce from the sub continent. Since the proclamation of the abolition of slavery in 1833, there was the urgent need to replace the local labourers liberated from slavery by an indentured workforce. This workforce later on became a majority population group. 453,063 Indentured labourers were brought in Mauritius under the indenture Agreement.

The status of being a Slave and the Code Noir

· the slave has the status of a ‘good’ or ‘bien meuble’

a slave can be bought, sold, hired or pawned

· the owner has absolute power over him or her

the owner controls not only the labour of the slave but his person and life after work. Slave women for example were sexually exploited.

· the denial of family ties

a slave is an ‘exclu’ in a slave society

A slave had no existence in law at that time as he/she was a ‘bien meuble’, (‘res mobiles’, a ‘good’) and the legal status of the slave decided by all laws that applied to goods or moveable property. Far from proposing his workforce as a merchandise, the slave himself is an object. The employer buys the merchandise which belongs to him. The owner has the right to sell, to kill the slave. There is choice of becoming slaves, you are black and automatically you become a slave, maybe why there was no Code des Esclaves but instead Code Noir (Lettres Patentes)

A Slave did not have any human dignity. It is just a ‘Washing machine’. Slaves had no right of marrying. Their children were the property of the slave-owner not the parents. Slaves only inherited misery, not given money, only their owners were compensated. Do slave objects have a soul? Did the slaves loved their counterparts as they loved themselves?

Till then enjoy today’s public holiday. However do not ignore that your ancestors have toiled hard for what Mauritius today is. The Key and Star of the Indian Ocean is the product of the sweat and blood by the labourers coming from the great peninsula. You can read more on  Wikipedia – the History of Mauritius, today, if you have some spare time to ponder and analyse  critically on Mauritian History.

This entry was posted on 2 November, 2010 by Ashesh. It was filed under critical thinking, Philosophy, Sociology, That's Life! and was tagged with Mauritian Theatre, Mauritius.