First of all Happy New Year 2014! Hope the first 10 days of 2014 have been very promising till yet and the resting 355 days reserve many good things and major accomplissements that you deserve.

I would like to talk on the wonderful adventure that I had embarked on the creation of the Documentary Drama on the Life of Swami Vivekananda. This was in the context of the Residential Seminar of the HSS (Mauritius) based on the theme of ‘Celebration of 150 years of Swami Vivekananda’.

Well, it all started with the idea of searching for a Drama script on his life. I called Dad to enquire about same if he has in his possession etc..but nops… I realised I had to be the playwright, which is not an easy task! Then got few books from Harry Bookshop, Port Louis based on the Teachings and Life of Swami Vivekananda. Had a quick read but needed some more resources as I did not had much information on Swami Ji unfortunately.

Then came into my mind to use Celtx.com to do the Typewriting. After downloading the software and having got an account, I found Celtx was friendly to use and very convenient to type in the ‘Scene Directions’, the Characters, the Dialogs etc.

Got through the books everyday gathering information and putting them all into form of a Play by creating different Scenes:

Furthermore, I came with the idea of vising Ramkrishna Mission at Quinze Cantons Mauritius in order to record a small Documentary. It was a great exeprience during which I learnt a lot with my preliminary knowledge on Cinematography. Got to apply techniques such as Wide Shot, Travelling and taking the interview with Close Up. The help obtained from Ramakrishna Mission also was the key ingredients in the crafting of the play with authenticity.

Furthermore, for the first time I got to do Digital Editing. This took me more than 3 weeks and the results were very exciting! Got to install Final Cut Pro 7 on my Macbook and understand its various components – Timeline, Effects , Import Raw Footage, Cut and Trim etc.. with nothing but clicking on ‘Help’ and some YouTube Tutorials.

Got first experience of rendering which is a time-consuming process requiring enough disk space and RAM.

However, the most interesting part was the audition and casting and rehearsals for the drama by Swayamsewaks and Sevikas. I was motivated to see enthusiasm on behalf of swayamsewaks bandhu attending the seminar to take out time  to perform their rehearsals despite the hectic schedule of Shivir complemented with fatigue and ‘some level of homesickness’.

The big challenge was in fact to set up the play within 4 nights of rehearsals!!!!

And specially a good deal of artists have never done a play before. But it was a great opportunity to train them to be on stage! A golden opportunity to share the Art of Acting with others.

On the D-Day, came support from Dad who had made the ‘Pagri’ of the Protagonist and also the makeup of the artists. (I had a thought of my technical crew for the lighting etc, but had got support from a sound technician from Vallee des Pretes, who gave a big helping hand.) 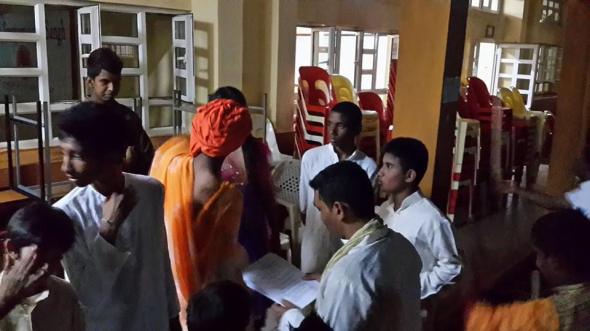 Conclusion: it was an awesome opportunity to work with the artists to stage this Documentary Drama. The feedback from the audience were all positive specially by complementing for the first time videos with drama scenes. It added more to reality.

Today going to watch the Mono Act by Actor Shekar Sen  on  Swami Vivekanda. This is in the context of World Hindi Day 2014. 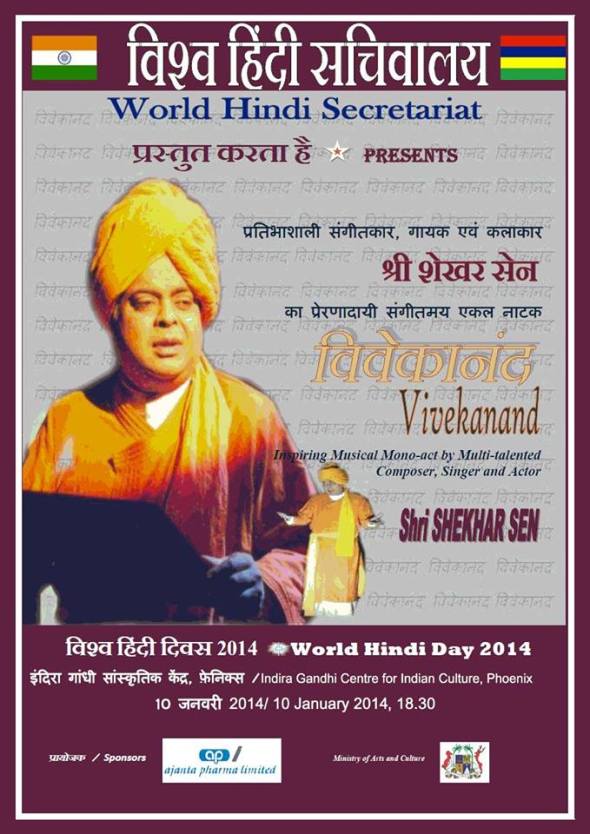 This entry was posted on 10 January, 2014 by Ashesh. It was filed under Sociology .