it is with much pleasure to invite you to the final drama rehearsal of hindi play ‘Natak Nahin’ on Wednesday 10 April 2013 at Sarvodaye Ashram, Shivala Road Terminus Triolet.

Well after nearly 3 weeks of hard work, everyday rehearsals till late night as 23:00, we finally feel that we are ready for the National Hindi Drama Festival 2013. Our slot for the Preliminaries is on Friday 12 April at Serge Constantin Theatre, Vacoas, at around 13:00. You are most welcome to attend and watch our final drama live ON STAGE!

Our Stage Rehearsal was held Wednesday last – 3 April and we are quite happy with our work that day. 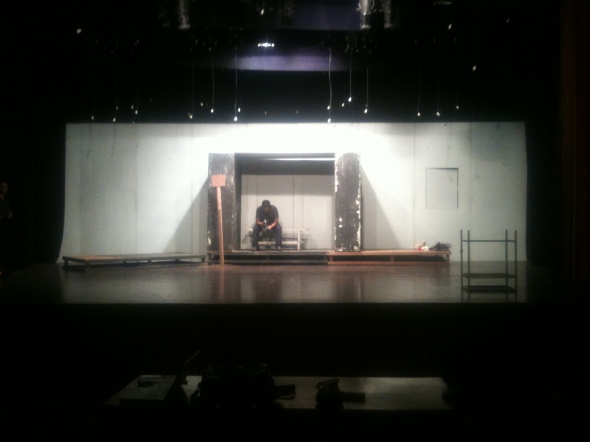 We managed to make the setting for a Bus Stop with the materials that were present at Trafalgar. And with great luck the Sound system present there could play our MP3 files!!! I was greatly tensed because of that, as had little time to convert around 7 files to audio.

Just Unfortunately, the Lighting was not available to do rehearsal, as they were all unplugged due to the heavy flooding which occurred on Sat. 30 April 2013.

Personally, I felt great to be back on stage and participating in the competition after nearly 8 years!! During my childhood, teen years, for quite a good numbers of consecutive years i used to participate in Hindi, Urdu, Bhojpuri and English plays, along with other Full-Length plays by the Academy of Performing Arts.

The full casting is as follows:

On the Technical side we have:

A great team of technicians also as on Saturday last – 6 April 2013, we spent the whole day crafting the settings! appreciate the hard work and committement! hats off to you guys!

OK Time to go and collect the artists now for a final rehearsal for tomorrow’s show!